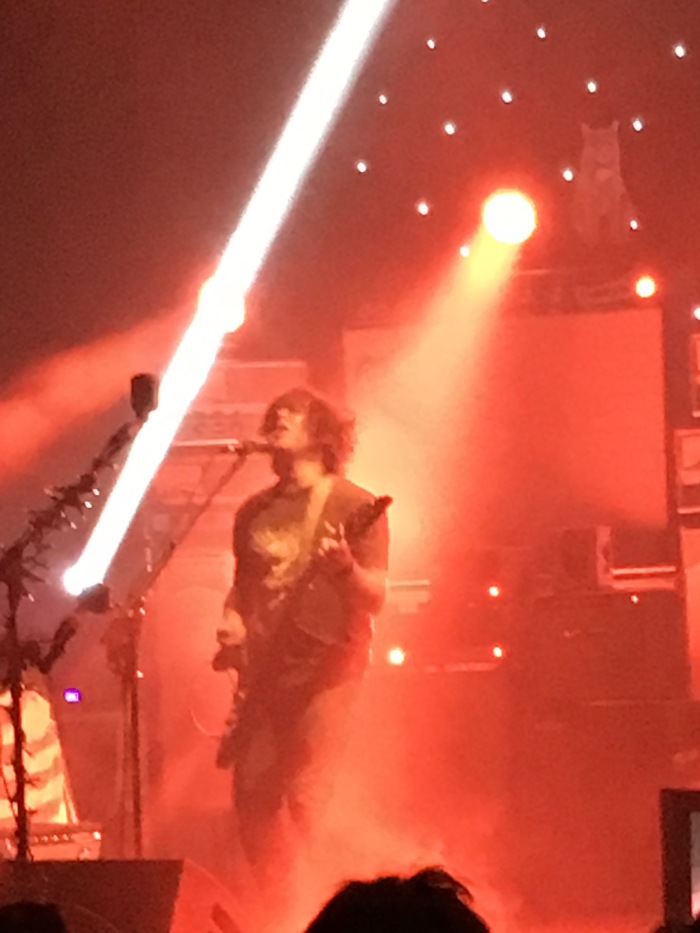 It has been nigh upon seven weeks since my last visit to Dublin, a trip which left me with a warm familiarity with the city and the things that are possible here.  Of all the stops on my manic journey to see Ryan Adams perform seven times in twelve days it was probably the three nights in the Irish capital that I was most looking forward to.  There were bars I wanted to drink in again and places I wanted to see between the two performances at the elegant old Olympia Theatre.  So it was perhaps a little disconcerting to find that staying in a slightly different part of the city from my previous two visits would completely throw off all my bearings and cause me to lose all familiarity with the place.  I felt like a baby who is learning to walk, finding myself wandering across bridges without knowing it and down unidentifiable cobbled lanes, leading me to places I had no idea of.  And it was even worse when I was sober.

I have developed this remarkable knack – in cities and in life – of having no discernible idea of where I am going but yet still finding my way to where I need to be.  Part of the trick to this in a city is to pinpoint a landmark or a memorable place of interest in your mind, so that when you see it you know that you are on the right track.  Mine was a brightly coloured building on the opposite side of the River Liffey from the Custom House building which in the map of my mind appeared to resemble a gay jigsaw puzzle.  The Spire also proved particularly useful for this purpose.  On my first two trips to Dublin I could not see the point of the Spire, and I thought that was a pretty good joke as well as a pertinent observation, but it turns out that the tall phallic landmark does have a very good and important purpose:  it is essentially a €4million homing device for drunks.  Because at night, when the sky turns dark (or at least darker than during the grey, rainy day) the point of the Spire will glow, helping even the most inebriated of people to see it from almost anywhere – and when you see the Spire you know where to find O’Connell Street, from where you can find your way home.

I wanted to use my time in Dublin differently from when I was last here.  That is to say I wanted to stay out of the bars until at least four o’clock.  This was partly out of a seemingly noble sense of actually wanting to do something useful and also because, at a minimum of £6 for a pint of beer, I would otherwise have to re-consider my €100 daily food and drink budget.  I was successful in achieving this exactly one-third of the time, and on Tuesday I embarked on a three-hour walking tour of the city and followed that up with a wander around the National Museum of Ireland – Archaeology, having been told that they had on display 2,000-year-old human sacrifices and thinking that would be a cheerful way of spending an afternoon before a Ryan Adams gig.

Observing the well-preserved religious artefacts from Celtic Ireland along with the books and the tools from Medieval Ireland was an interesting and thought-provoking way to pass a couple of hours before heading to the bar.  I thought about the type of museums people would be visiting a hundred years from now and what kind of displays they might have.  There probably won’t be physical museums, as such, and we’ll only have to push a button on the microchip implanted in our wrists to bring up a virtual reality vision of a ‘museum’ in our minds.  Instead of books and important religious documents they’ll display kindles, and there will be iPhones from the age where we had to actually dial numbers or send emojis to communicate with another person.  There won’t be plaster cast representations of how a mummy might have looked, but instead you could swipe through an array of selfies.  And there will, of course, be digitally stored Tweets from the time when people used so many characters to express an opinion.  They might showcase a pen as a token joke exhibit and still nobody will make the suggested donation. 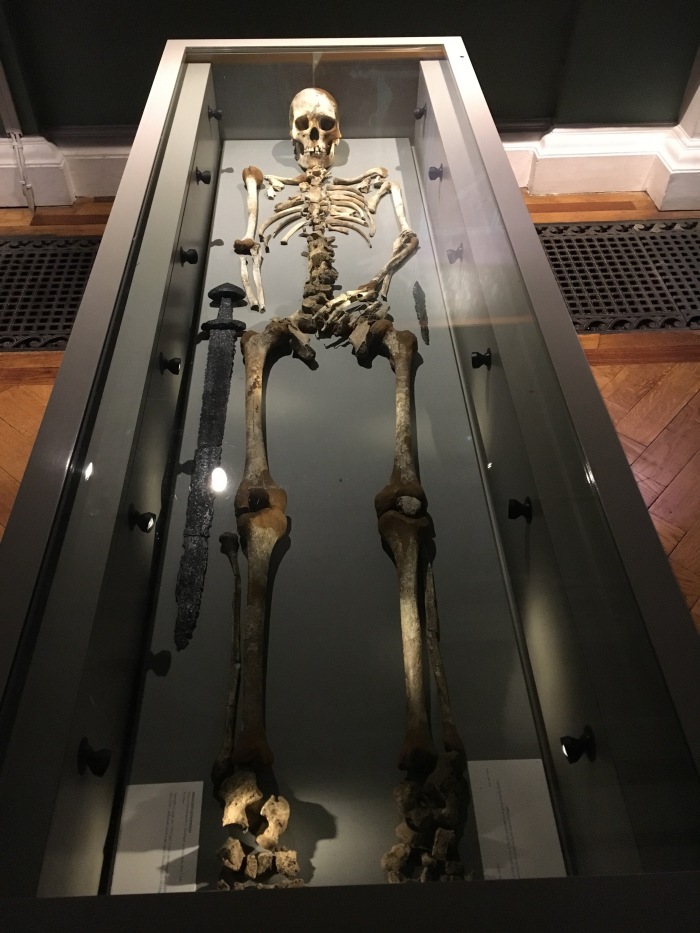 It was the room dedicated to the Vikings which really had a profound effect on me, though.  The very first display houses a skeleton from an excavation of an 11th Century site in Dublin and staring down into the glass case of this brutal warrior brought me to the realisation that, at the end of the day, we’re all really just a bag of bones with a very big fucking sword.  I looked into the hollow eyes of this Viking and decided there and then that I do not want my skeleton put on display in a museum.  The thought of tourists in the future standing around the exhibition of my skeletal being and criticising my bone structure filled me with dread.  I could hear them commenting on the state of my tibia and how “I’m surprised he managed to go as long as he did with femur like those.”  Women would question the need for preserving my penis when surely museums should only exhibit items of usefulness, and there would be a general consensus that “his ribs are surprisingly bony, considering…”

The only natural place to go after viewing an exhibit of a skeleton is for lunch, particularly if for some reason my posthumous orders are to be defied and my bones will be put on display for ridicule.  I’d better get some more meat on those things.  Down the road from the archaeological museum is K.C. Peaches, one of those self-service canteen style restaurants.  It is the kind of place which encourages the most ridiculous food combinations a person can think of.  I scooped pork cheek marinated in red wine onto my plate, alongside a helping of spicy Malaysian chicken and lime with some white rice and peas and dropped on some cold Japanese noodles with celery.  I walked around this island of various hot and cold foods and simply piled everything I could onto my plate because it’s food and it’s available and you can.  There is no consideration for diet, taste or aesthetics.  So I took this plate of multiple ethnic cuisines to the counter where as I approached the young woman behind the desk remarked:  “That’s a large plate,” and I wasn’t sure whether she was making an observation or a judgment – she would have been correct either way – so I panicked and ordered a medium cup of coffee (what else would you drink with spicy Malaysian chicken?) in an effort to relieve the stress of the situation, hoping that she might recognise that even though my food order was large my drinks order was medium, so I can’t really be that much of a sloth.

It wasn’t just canteen style hostesses who I was struggling to communicate effectively with.  By Tuesday evening I had reached the point in my interactions with the various barmaids in town where the only banter I could engage was some arduous routine whereby I would empty all of the coins from my wallet, as though to imply that I couldn’t tell the different denominations of currency apart.  Of course, the more I tried this ‘bit’ the more I realised that I really couldn’t tell the coins apart.  Nevertheless, I would count through the coins in my hand, trying to make up the €6 whatever cost of a beer and I would apologise and say something like:  “Sorry, I’m struggling to make any cents (sense) out of this.”  Which was invariably met with stony silence each time, or occasionally a “don’t worry, take your time,” at which point my faux stupidity had been translated as actual stupidity.  One time I repeated the joke, hoping that I could make the North American barmaid laugh, or at least crack a vague impression of a smile in recognition at my attempt, but there was nothing and I would eventually just hand over a twenty and add to my collection of coins. 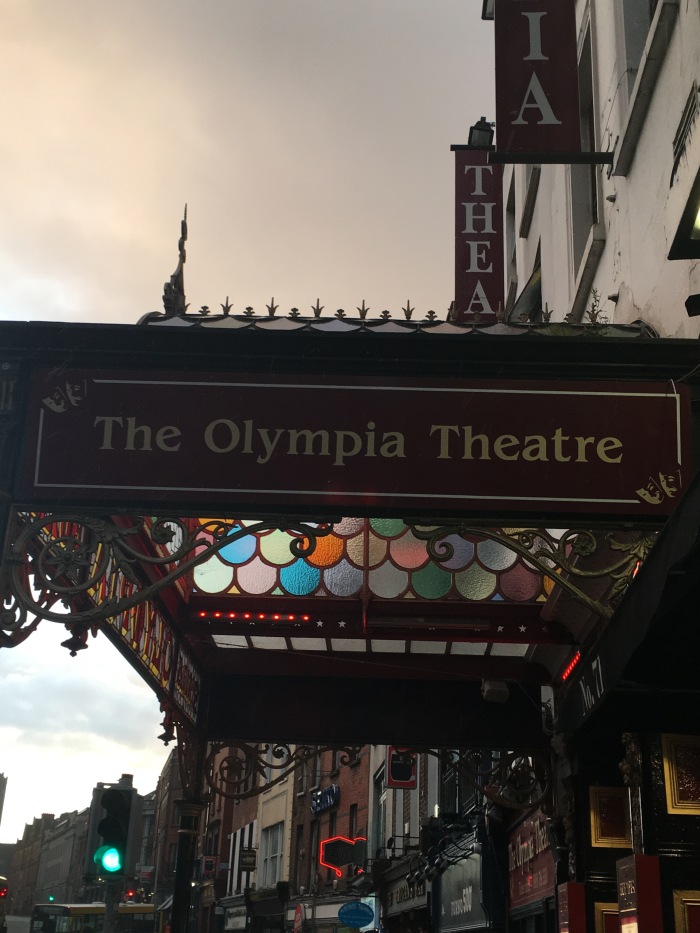 Being that my decision not to drink at the concert in Belfast on Friday worked out pretty well in terms of remembering details of the gig, and indeed remembering actually being at the gig, I resolved that I would do the same in Dublin and conduct all of my libations before and after Ryan’s set.  I was pleased that I came to this decision, as the two nights at the grand Olympia Theatre are almost certainly the best I have seen him perform.  To date this tour seems to have found him in a very focussed place where he is intent on playing the best two hours of his life every night.  His band is great and the set lists have been perfect.  I counted seven changes from the first night to Tuesday’s show and on Monday he played Love is Hell – which he had performed for the first time this year in Cork on Saturday night and I had feared I might have missed it.

My relative sobriety did come with a downside, however, and that was my increasing disdain for the couple standing in front of me.  Firstly I failed to understand why a couple would even go to a Ryan Adams show together, and this question weighed on my mind as I watched them dance along to lyrics like “anything I say to you now but goodbye is just a lie” and “you and I together, but only one of us in love.”  But not only did these people have the gall to be happy in a relationship – they (more so he) also had to record every other song and upload it immediately to their Instagram account.  They didn’t want just me wallowing in their happiness; the entire world had to.  I think the true source of my irritation was the fact that they were filming only the more recent material, indicating that they have perhaps only been fans since the last album or two.  Which is fine and I would actively encourage anybody to listen to ‘Ryan Adams’ and ‘Prisoner’ – but when he put his phone back into his pocket and left for the bar when Ryan started to play Dear Chicago that got on my goat.  If you’re going to insist on taking your partner to a Ryan Adams show, at least stick around for the most depressing and miserable song in his back catalogue.