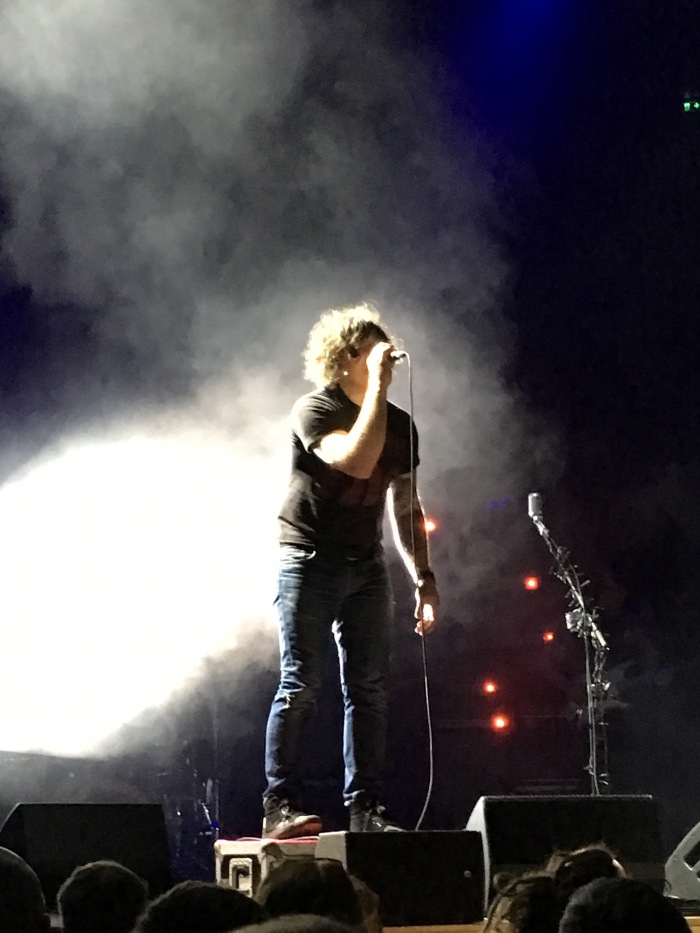 When I left Dublin towards the end of last week with the realisation in mind that I hadn’t engaged in a single conversation with another person I couldn’t have expected that by the end of my brief stay in Glasgow on Saturday I would have experienced a deluge of vocal interactions.  I talked to exactly as many people as Celtic scored goals against Ross County:  four.

I had hoped that my recent twenty-two hours in Belfast would have given me a greater capacity for understanding the accent of the Northern Irishman who sits two seats along from me at Celtic Park.  In the past I have found myself nodding along to his every utterance, trusting that he hasn’t been saying anything contentious that I’ve inadvertantly agreed with because I can understand only every seventh word he says.  I took my seat a few minutes before kick-off, sharing a nod of acknowledgment with the older gentleman as I passed him.  After some moments of silence he reached across the two empty seats between us and tapped me on the arm.  I turned my head in his direction and felt an anticipation I have rarely felt when waiting to hear what a man is going to say about a game of football.  This would be my moment of truth, the first test of my newly discovered understanding of the Northern Irish accent.  He said something about Moussa Dembele – that much I know – but I will never know what, for his accent remained almost completely indistinguishable to my ears.  I nodded and smiled.  It’s good to see him back.  I took a wild assumption that he wasn’t complaining about Dembele returning to the team from injury.

This scene was to be repeated often over the course of the afternoon:  him stretching across the empty green seats, his bulky hand crashing against my forearm with a force that would probably crush a grape if I was in the habit of keeping them in the sleeve of my jacket, me taking my eyes off the game to face him and eventually nod in acceptance of whatever opinion he was offering.  I began to wonder if his increasing act of striking my arm was in some way a recognition of my inability to understand his words and he was urging me to try harder.  You better understand what I’m saying to you or I’m going to keep hitting you.  In that event I had better bring padding to the next game. 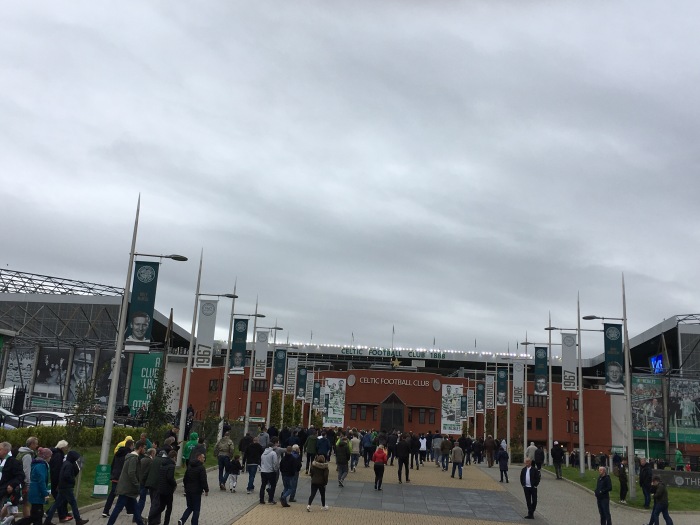 As is usually the case the half-time break afforded me with an opportunity to escape my translation issues for at least fifteen minutes and I took my place in the queue for a pie.  For a change the food stall experience was relatively unchallenging and I got the pie I wanted with minimum fuss.  The real task at Celtic Park these days is finding brown sauce.  I ventured to no less than three condiment stations in search of the savoury accompaniment and found nothing but tomato sauce and sachet upon sachet of salt and pepper.  I wondered of what use pepper is to anyone eating the standard pie, chips or even pizza.  No wonder there is so much pepper; nobody needs it!  I cannot think of a single food on offer at Celtic Park that would be enhanced by a sprinkling of pepper, whereas a pie practically demands brown sauce.  I could tell that the search was once again forlorn and the pie was beginning to burn my hand – which at least reassured me that it was hot – and I resigned myself to a pie without brown sauce.
That evening I would find myself sitting at the bar in the Travelodge prior to meeting my friend with the pink hair, my arm suitably recovered from the football to hold a pint of beer.  My thoughts were lost in the blandness of the setting:  the decor which was more beige than beige, the mundane pop music filtering from a speaker over an otherwise empty room, the subtitled BBC News 24 on a television in the corner, an offering of Stella Artois or Bud Light on tap.  A curly-haired blonde barmaid appeared behind the bar as I was nursing a cold pint of soulless beer, looking entirely different to the balding middle-aged man who had poured me the pint minutes earlier.

“What brings you to Glasgow?” I heard her say, and I automatically assumed that she was speaking to another guest, even though I knew I was the only person who would be drinking at eight o’clock in a Travelodge bar.  I looked up from my glass and, sure enough, she was looking in my direction.  My natural instinct is to answer such a question with a response along the lines of “the train”, but since this promised to be my first actual conversation with another person since I left Oban on Monday morning I decided that I would try to not fuck it up by being myself.  I assumed the unfamiliar role of a normal person and responded by telling her all about my trip seeing Ryan Adams perform seven gigs in six cities in four different countries, adding the usual caveat about him not being the Canadian rocker with the letter ‘B’ in front of his name.  This story remarkably did not cause her to lose interest and she continued to talk to me.  We discussed the iPod she received as a gift last Christmas but has not yet used and I noted how they are coming back into fashion like the vinyl record player, even though I have no idea how true that is.  We touched upon the way that Google Maps has taken all the fun and adventure out of getting lost in a city – a conversation I am certain I had in Belfast – and she told me all about her equestrian studies and her hopes to eventually earn a living preparing horses for shows.  She clearly enjoyed talking about horses and so I indulged her, and she talked and talked and talked — until eventually I asked what certainly ranks amongst the most stupid questions I have asked a girl.

“Is there a drink riding limit the same way there’s a drink driving limit?”

I don’t know why I wanted to know the answer to that question, and quite naturally it seemed to be something that had never occurred to the barmaid.  She did her best to try to formulate some kind of response but it was evidently a subject that was yet to be covered in her equine lectures.  I left the Travelodge bar to meet my friend with the pink hair and I couldn’t help but sense that my interaction with the barmaid would have ended better had I not introduced the idea of riding her beloved horses whilst intoxicated.  I suppose it could have been worse and I might have suggested getting the horses drunk prior to dressage.  This was all on my mind when I entered Variety and considered the etiquette of sitting at a booth when your friend has already arrived.  Is it appropriate to sit on the cushioned area next to them or is it more polite to sit across the table from them?  I bought a beer and sat on what appeared to be a miniature representation of a stool which, upon glancing around the bar, seemed to make most other men who were sitting on similar stools look like giants.  I suspected that to them I would look like I was afraid to sit next to a girl. 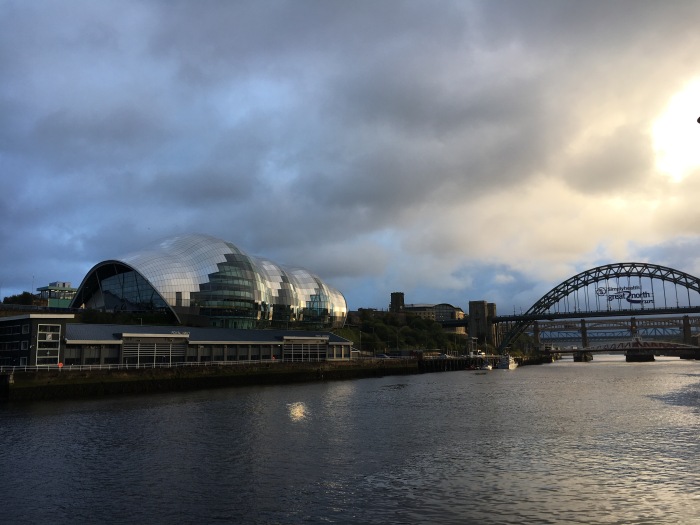 I returned to my hotel some hours later and, safe in the knowledge that the equestrian student had finished her shift at eleven o’clock, I headed to the bar for a nightcap.  This seemed a particularly questionable decision considering that I was scheduled to be getting on a train to Newcastle little more than seven hours later, but there reaches a point in any night when drinking Jack Daniels that any decision can easily be justified.  I found myself in conversation with another talkative barmaid and I can remember querying the spelling of her name on her badge; ‘Kaitlynn’.  I suggested that the second ‘n’ seemed unnecessary and I think she broadly agreed and blamed the whole scenario on her parents, which seemed reasonable considering she probably had minimal input in the discussion.  I asked her when they stopped serving at the bar and she informed me that 2am is the cut off, though they will sometimes continue to sell alcohol if it is busy and the guests aren’t too drunk.  I was the only person at the bar and my watch clearly stated that it was about five minutes past two.  Out of ten, how drunk am I?  I asked, hopeful of enjoying at least one more Jack Daniels.  “You’re definitely an eight out of ten.”  I accepted this score without dispute and suggested that we still have two points to play with, so she poured me another Jack Daniels and the 09.30 train to Newcastle was a hellish experience.

Conversation returned to being found at a premium in Newcastle, though I was able to share in the thrill one barmaid had in being handed her first plastic £10 note when I caught sight of her photographing it before putting it in the till.  I questioned whether she was some kind of currency enthusiast – perhaps hoping that she could help me identify some of the coins in my wallet.  She explained that she had not seen the new £10 note until being handed it by another customer now and I asked if it is the one with the face of Jane Austen on it.  She didn’t know and handed the note over to me to examine.  I realised that I don’t know what Jane Austen looks like but didn’t want to admit this to the barmaid.  Oh yeah, that’s the one with Jane Austen on it alright.  I noted that the plastic money is supposed to be practically indestructible but she claimed that she can tear the £5 notes.  How?  “You just have to keep trying…they’ll tear eventually.”   I felt both impressed and suitably threatened. 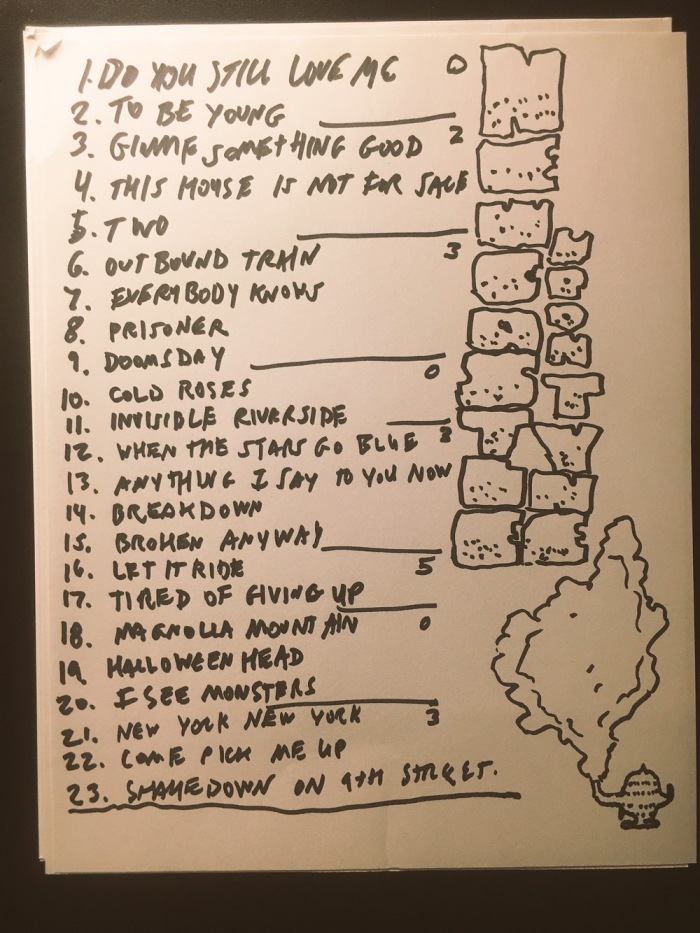 Ryan’s set at The Sage was another unique occasion on this tour.  He was feeling sick and therefore was “low energy” which seemed to contribute to the set being at least a couple of songs shorter than previous nights and to him indulging the audience – which was entirely seated – in far more inter song banter than elsewhere.  He acknowledged early in the night the awkward nature of playing a rock show to a seated crowd, and it was certainly a strange experience.  His humour added a different dimension to the show compared to the rest of the tour, and his theory that the couple he spotted leaving on an upper tier were “probably away to make out while listening to KISS — though hopefully pre-1982 KISS” was joyful.  That he and the band played Tired Of Giving Up – one of my favourite songs from his eponymous album – for the very first time anywhere made this a memorable night.

One thought on “The day the horse left the stable (aka Ryan Adams @ The Sage, Gateshead)”