It started innocuously enough.  For some numberless period of time – it could be months, might even be years – I have had what always felt like a small spot on the back of my neck.  It wasn’t painful or agitative and never really did much of anything: at least with regular acne there is a plump little white head which has you fearing that everyone is staring at it and thinking how hideous and unhygienic it appears and how awful a person you must be for allowing such a thing to happen to your skin.  This small spot didn’t even have those characteristics of an ugly thing.  It was a harmless blotch on the otherwise pale, fleshy and nondescript landscape of my back.

On Thursday morning of last week – I remember that it was Thursday because it was two days before St. Patrick’s Day, which fell on Saturday – I felt a painful swell on the back of my neck.  As the day grew longer so did the lump on my neck, and by the time night arrived it had become the size of a ping pong ball.  Or at least, having never played ping pong, what I imagine the size of a ping pong ball to be.  It sat directly under the collar of my shirt and with every layer of clothing it was like adding another layer of hell.  My shirt, my tie – as purple as the skin around the deformation on my neck – my long black coat, my small khaki satchel:  they all created an agony the like of which I have rarely felt.  By the weekend the discomfort was such that I had practically no peripheral vision on account of the pain turning my neck in any direction would cause.  The simple act of crossing the road required a full body swivel and I expect that the whole charade looked quite ridiculous to any passing motorist as I meandered slowly to the other side of the street, my shoulders crumpled up like an unwanted Farmfoods leaflet and my head gravitating towards the tarmac, barely able to face the oncoming traffic.

By the following Tuesday, when the swelling had not subsided and had perhaps even intensified, I decided that I should make an appointment with my GP.  I had not visited the doctor this millennium and wondered whether the etiquette would still be the same as when I was last in need of medical guidance.  I sauntered into the sterile surgery and surveyed the scene in the waiting room.  Over the occasional sound of people coughing or wheezing Oban FM played, adverts for Jewsons timber providing a curious soundtrack to sickness.  I found a seat in the least populated corner of the room and contemplated the madness of gathering all of these sick people together in one place where they can exchange germs and contagions like some kind of book club.  And here I was, not even sick really, just with a lump the size of a ping pong ball on the back of my neck.  I spied my fellow patients with suspicion – there was no chance of them catching anything serious from my painful swelling, but who knows what they might infect me with?

It is always the way when you are waiting for something that time seems to be passing a lot more slowly than it actually is.  I was probably sitting for around fifteen minutes before my name was called, though it felt like much longer.  Due to the short notice of my non-sickness and need to see a doctor I hadn’t had time to practice my I’m-perfectly-comfortable-with-the-time-I’m-being-asked-to-wait-to-be-seen-and-am-not-feeling-at-all-impatient seating posture, so I went with a standard right leg folded over left leg pose and arched the fingers of each hand against one another, as though I was unconcerned and pensive.  My thoughts turned to the difficulty I had tying my shoelaces earlier that morning; not solely due to the pain in my neck, but also because over time laces seem to have a way of becoming longer on one side of the shoe than the other.  I wondered why this is the case, whether I am the only person who suffers from this shortening sorrow and, if so, have I been tying my shoelaces wrongly for nigh upon thirty years?

Finally a female doctor emerged from the myriad of rooms and beckoned me to follow her to an office which turned out to be almost directly behind where I was seated but which I had to weave through a veritable maze to reach.  She greeted me with a kind smile as I approached her and she spoke.

This immediately struck me as an unusual question for a doctor to ask.  People rarely answer this question with honesty in day-to-day conversation and there is an unspoken acceptance that there is a stock supply of responses we choose from in order to move the conversation on:  I’m good/I’m fine/I’m well (or similar variations thereof,) thanks.  Typically if someone tells you that they are okay it means that something is wrong and no further questions are invited.  Nobody ever outright tells anyone that they are terrible, and yet in the one place where I ought to be telling someone that I am not feeling particularly great I was being invited to participate in the daily deception of routine conversation.

“I’m pretty good thanks,” I responded with my shoulders hunched and my neck throbbing and twitching as though my lump recognised that it was soon going to be dealt with.  “Aside from the fact that I’m here to see you, of course.  How are you?”

“I’m well, thank you.”  Of course she was.  Doctors are always well.

I walked into the doctor’s room behind her and found myself bemused by the fact that there were two chairs in addition to her own and by their positioning on either side of the room.  If there is a requirement for there to be two seats in a GP’s office I would expect to find them both next to the doctor’s desk, perhaps for cases where a patient needs support from a family member or a loved one.  But I couldn’t understand why these chairs were situated so far apart and I found myself questioning which it would be most appropriate to sit in.

“Do you have a preference which chair I sit in?”

“It’s entirely up to you,” the doctor responded, not at all helpfully and as though this was the first time she had ever been asked what seemed to me like quite an obvious question.

I stood in the midway point of the yawning chasm between the two chairs for what was probably four or five seconds and considered the possibilities.  I noticed that her own seat – which was much larger and more comfortable looking than the others and presumably not an option for me to sit on – was facing the chair next to the desk and I assumed that, although she hadn’t said it, this would be the chair where most people are seated.  I therefore reached the conclusion that as I was already feeling strong discomfort from the substantial growth on the back of my neck I would disrupt the doctor’s comfort by sitting in the farther away chair and force her to turn to face me.

As soon as my buttocks touched the cushioned surface of the chair my hands reached for the knot of my coral pink tie and I quickly released it from its Windsor knot, before moving to unbutton the first three buttons of my baby blue shirt.  My collarbone was exposed before the doctor could ask me about my symptoms.  It is rare that I have the opportunity to undress – even a little – in front of a woman and I relished the chance to dampen the possibility of any sexual tension before it arose in a different manner from my usual routine of talking to the opposite sex.

The doctor took a brief glance at the raging swell on the back of my neck and declared that it was ready to burst.

“That sounds like it could be messy,” was the only response I could muster.

She agreed and supplied me with a handful of exactly seventeen adhesive island dressings and wrote a prescription for some unpronounceable antibiotic.

That evening I began my course of twenty-eight antibiotics and hoped for the best.  The lump reacted furiously to the introduction of medicine to my bloodstream and pulsed and ached more than it ever had before, assisted by my uncertainty as to whether I could continue to swallow Nurofen whilst taking antibiotics.  My blue haired biomedical research student friend assured me that the drugs have different purposes and can be taken together and I felt a relief I have rarely experienced when I popped a pill and fell asleep.

When I woke up on Wednesday morning – fortunately alive, despite the cocktail of drugs in my system – I found that the adhesive island dressing applied to my neck by the doctor was a kind of off-mauve shade with blood and other releases from my swell.  It seemed like a good idea to change the dressing and clean the wound, and after some considerable grunting and several attempts at gently coaxing the adhesive from my skin I would soon encounter the difficulty of trying to apply a dressing to the back of my neck using only one hand and two mirrors.  Over the years I have become pretty good at dressing myself, but applying a dressing to myself?

As Wednesday developed and I began to follow my blue haired biomedical research student friend’s advice of staggering intakes of paracetamol and ibuprofen in addition to my antibiotics I realised that I was starting to feel high.  The pain was dissipating significantly, my little cheeks were becoming pink and I felt a giddiness overcome me.  I hadn’t felt a high like this even on that one occasion where I smoked marijuana from an apple, which was as much an act of getting one of my five a day as recreational drug use. 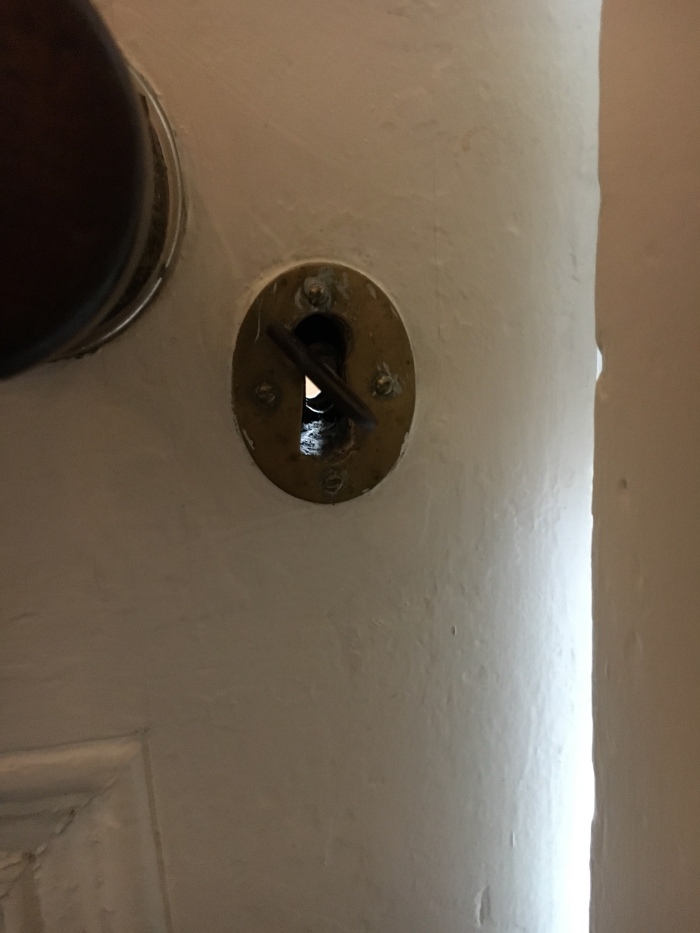 The more paracetamol and ibuprofen and unpronounceable antibiotic I took, the more I was going through my days in a blissful oblivion.  For the first time since I moved into my flat in January I discovered that there is an old key sitting in the lock of the kitchen door.  This took me by surprise and I couldn’t fathom a scenario where I – or anyone, for that matter – would want to lock the kitchen door.  Of all the rooms in my flat it is the one where I would least be requiring privacy.  I tried to imagine a scenario where some nefarious fiend breaks into my property through the front door and immediately makes a beeline for the kitchen, presumably in search of utensils or cutlery or a bottle of 2015 Reserva Rioja, but is foiled by my preventative action of locking the kitchen door before leaving and he turns away empty-handed and disappointed.

I took the key from the lock and tried it in the other locks on the doors in my flat, namely the bedroom door and the living room door, to see if it was a multi-functional key.  It isn’t, and only the kitchen door can be locked by the key, which left me wondering where the keys for the other doors are and whether the entire thing was some kind of drug induced hallucination – similar to the way that on Thursday evening I mistakenly bought cous cous when what I was meaning to buy was quinoa.  It was this latter incident which brought me to the realisation that although it feels pretty good being high and it helps to eliminate a lot of pain, drugs are a cruel and dangerous thing and I have absolutely no idea what to do with a bag of cous cous.