With my friend, the spider, gone from my life I was feeling low and lonely and at a loss.  In an effort to bring some meaning to things I began to compile a mental list of goals I wanted to achieve in the coming week.  I thought it would be an idea to shed some light on my situation by changing the lightbulb in the living room ceiling fitting which has been out since I moved in, but I wasn’t sure how I would do that when the entire reason I had befriended the spider was that the ceiling is too high for me to reach.

Other items on my cerebral checklist included:  a need for more picture frames to cover the blank spaces on my walls; to make a decision on whether or not I should invest in a kitchen roll holder, having balanced the eternal trouble of having to reach into the small low level cupboard every time I make a spillage against the aesthetics of having paper on display; to buy glasses (or something similarly useful) to fill the empty shelf in the glass cupboard; dispose of the dead houseplants, as the living room is beginning to resemble a particularly sorry memorial garden to dead houseplants.

Before tending to my list of tasks I decided that I would go out and buy some beer.  Hump day – or ‘Wednesday’, for those who still follow the Gregorian calendar – is typically the day of the week on which I will stock my fridge with beer for the coming weekend.  Two days are ample time for a box of beers to chill in time to celebrate surviving until five o’clock on Friday for another week.

Each week I try to manipulate my grocery shopping so that on Wednesday I am also buying spinach, sugar snap peas, asparagus, blueberries and other items which make my basket appear less dependent on alcohol, even if it is ultimately the only reason I am in the store.  On this occasion I strolled up to the self-service checkouts with more confidence than usual, being that it was the middle of the afternoon and I didn’t have to stand back and awkwardly analyse each customer as I wait for a station to become free.  I scanned my greens and brown bottles and paused for an assistant to come and approve my purchase of alcohol.

After around thirty seconds one appeared and on the screen she was confronted by the question of determining whether I appear to be under 25, and therefore being required to produce ID, or if ‘the customer is clearly over 25′.  The assistant tapped this latter option and although I thanked her out of kindness I couldn’t help but feel that there should be a third response which isn’t so damning.  Something like:  ‘the customer looks to be around 34 but is wearing it well’ or even “the customer is over 25 but has understandably had a tough few days’. 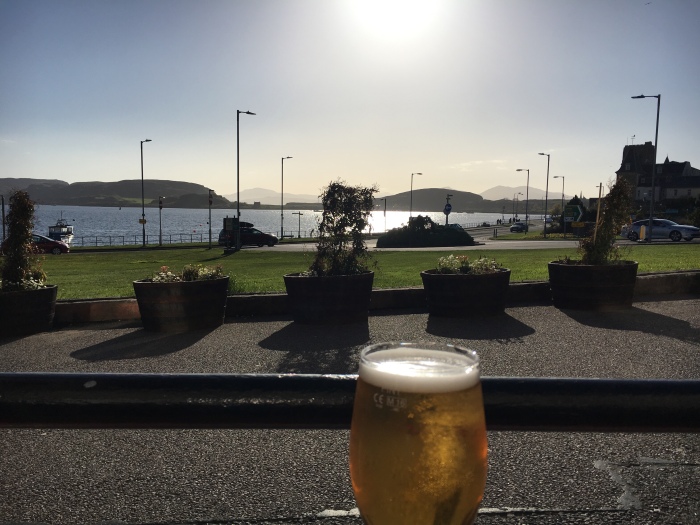 With the threat of some early evening rays breaking from the blue skies on Thursday I abandoned my ambitious plans for cooking a chicken and asparagus risotto and instead grilled the chicken and boiled the asparagus and ventured to my favourite seaside bar.  The sea has such a magnetic attraction and I have always been drawn to it.  It is both beautiful and dangerous, like all the best things we experience.  There is often something soothing about watching the boats moving through the harbour, the way they seem so elegant and effortless as they stay afloat.  Though maybe it was the beer.

I sauntered up to the service area – in the way a thesaurus might – and ordered a pint of Innis & Gunn from the young barmaid, who appeared exotic and European.  She flashed an immaculate toothy grin and I immediately thought that she had found my black sleeveless v-neck sweater, black shirt and baby blue tie combination pleasing.  When I went up to the bar for the second time she again had this big beaming smile and I wondered if she had seen my light blue socks or caught the scent of my aftershave.

I returned to the outdoor seating area and observed the ships in the sea; the islands in the distance looked like shadows dancing against a gold curtain.  Soon the barmaid came out to serve some food people had ordered and I realised that she had the same toothy smile the entire time.  It turned out that she wasn’t smiling at me, that’s just the way her face is.

After a few beers it seemed natural that my body would feel the need to expel some of the unwanted fluid and so I was compelled to take a trip to the bathroom.  This particular bar has three urinals and those to the left and right were occupied by work men in high vis jackets, leaving me the piggy – or the penis – in the middle.  Ordinarily such a situation might prove awkward for me, but on this night my bladder was not willing to wait for any man and things flowed along quite smoothly.  That was, at least, until the pungent evidence of asparagus consumption began to emanate from the steam below.  I shuffled nervously.  If I can smell that then surely they can too,  I thought to myself pensively, worrying that despite the heady mix of body odour, farts and general male toilet aromas it would be the scent of asparagus that would cause these heavy built work men to kick off.  They left shortly thereafter, without washing their hands, of course, and I couldn’t help but feel that I had offended them.

For much of the rest of the night I found myself considering urinal etiquette.  My strategy with pub urinals is always to head towards the one furthest from the door.  This is a trick I learned whilst riding the subway in New York City when I realised that the further down the platform you move away from the entrance the less crowded the carriage seems to be; because everybody is attracted to convenience.  The same theory tends to apply in the bathroom and the further away from the door you position yourself the less likely you are to become engulfed by fellow pissing participants.  Nothing concerns me more than when a man needlessly encroaches upon my intimacy zone, which should be at least nine inches, although nobody carries a measuring tape to the bar these days.

As Friday stumbled in – sleepily, despite the lights short circuiting in the lounge bar in Aulay’s the night before – my attention had turned to thinking of a suitable colour scheme for the day.  I favoured a yellow ensemble and this caused much consternation as the evening progressed.  In the first instance I was congratulated by a woman for following her suggestion of wearing a yellow tie and pocket square, and although I had no recollection of ever hearing such an idea it did strike me that it could be a fun development for my Fridays if I was to begin taking sartorial requests.  I suppose that such an endeavour would be a lot like a prison library, in that it would have its prose and cons.

Conversely, the formerly red-haired barmaid expressed dismay and questioned the accuracy of the match, which opened a mustard or custard debate.  I am no stranger to ladies conducting an inquest into the legitimacy of my wear and by the end of the night I felt vindicated by a girl who also wore mustard yellow.

As the week ended I was aware that I hadn’t achieved any of the goals I was aiming to.  Maybe next week I will get round to my list.  For now it seems to be a version of man built to collapse into crumbs.