My two new houseplants had been flowering into life for more than a week and I was beginning to convince myself that maybe I am not the incompetent plant killing sociopath that I once felt certain I was when I finished watering them on Wednesday morning.  It was bin collection day, and in keeping with my role within our block of flats I stepped outside to retrieve the emptied blue vessels.  I pinned the door of the close back against the wall with a brick which, for some reason, is shrouded inside an old towel and I wheeled the first of the three bins inside.  As I was doing this my neighbour on the ground floor was returning from the garden with a laundry basket in her hand, and with the radiant glow of early morning sunlight streaming through the open door behind me it struck me that she is quite becoming.

We exchanged greeting pleasantries – her voice carried a foreign flair, possibly German or Danish – and it occurred to me how contrasting our outfits were.  My neighbour was dressed in black lycra cycling shorts, indicating a degree of athleticism, whilst I was sporting a black and white tie and matching socks, which I suspected probably indicated to her that I had taken my sartorial inspiration from the Liquorice Allsorts mascot, Bertie Bassett.

Through the day I was conjuring scenarios in my mind where I could manufacture a meeting with the ground floor girl who cycles (when I am the ground floor guy who recycles.)  I considered that on an evening I could knock on her door and ask if she had any spare sugar I could borrow, though I dismissed this idea as being clichéd and only adding to her belief that I am beholden to my sweet tooth.  In a more nefarious notion I thought about the possibility of sabotaging her tyres in the hope that she would come to me as some damsel in distress, urging me to help change them.  I concluded that she likely has an equally athletic boyfriend who would fit new wheels for her and who would easily squash me when my deeds become evident, and even if she doesn’t I realised that I have never changed a tyre in my thirty-four years and I would only look foolish if she approached me in her moment of need and I fumbled with a foot pump.

Since I introduced multivitamins into my daily weekday morning routine at the beginning of June I have begun using them as a handy measurement of time.  If one tube of twenty effervescent tablets is equal to four weeks then it has been a tube and a quarter, or five weeks, since I last saw a person who I felt may have been my best friend.  Until I started taking these tablets each morning I didn’t know that people could fade out so fast, like a soluble vitamin in a glass of water.

It has been a twentieth of a tube since I had my last severe anxiety attack, although the incessant headache which rings in my head like the bell at last orders in the bar lasted long into Friday.  I haven’t been taking multivitamins long enough to accurately measure the time since my last romantic dalliance.

It was a night like any other Friday night when I embarked upon my usual post work, pre-pub routine.  I lit two small candles and placed them inside a pair of blackened tealight holders to burn a mound of my favourite ‘Full Moon’ incense purchased from Treadwell’s bookstore in London; drank a couple more than half a dozen bottles of Budweiser; listened to some of the more sad Ryan Adams songs on my playlist and watered my houseplants, because I had forgotten to do so in the morning.

My anxiety was still lurking sharply behind my eyes like the way a shy Lothario stands at the dimmer side of the bar, and I decided that the best thing I could do would be to go to Subway for a sandwich, because nothing cures sadness like cured meat.  It had been nigh upon eighteen months since I last visited the six-inch specialists, which was a place that once upon a time featured frequently on my Friday nights out due to me usually being too drunk to make my own sandwich and because of the smile.

So long had it been since I had eaten a Subway sandwich that by the time I joined the queue I had forgotten the etiquette for ordering and I had to be guided through the entire process, relying on the Subway girl’s expertise to remind me of how I liked my breaded cuisine.  I ordered a steak sandwich, as normal, and had it as a foot-long due to them being 30p cheaper than a six-inch after four o’clock and I felt like I was making a saving.  I finally enjoyed the soft drink I had been asking for on every visit and never received, and I spent so much time in the store that it felt right that I should offer to mop the floor.  I was inarguably a man wearing a blue suit with a pink pocket square and mopping the floor of a Subway restaurant in a neat figure eight fashion, though my actions were less sweeping anyone off their feet and more kicking myself in the bucket. 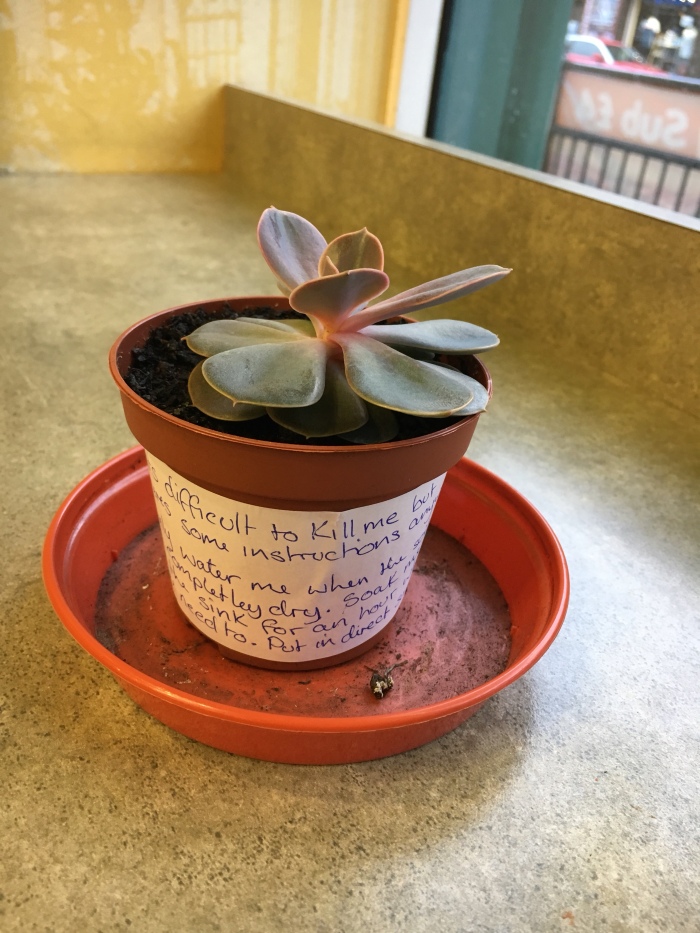 I wasn’t perturbed by this defeat, however, and in the evening the barmaid with the dreadlocks and the green fingers presented me with a small potted plant, complete with instructions on how to keep it alive.  It was a very thoughtful gift and I immediately named the plant Succy the Succulent, because it is a succulent.  The instructions suggest that it would be very difficult for me to kill Succy.  I placed her on the kitchen window, away from the other two more needy plants, and with a tantalising view of grass and some bushes on the other side of the glass.  My family of plants is growing, and every day they are becoming more of a replacement for romance.