In the early days of September, the temperature had dropped dramatically from the hazy highs of July and early August.  It had been raining incessantly, for as many days as I could remember, and when I was going to bed at night the only sound I was hearing was that of cars splashing through pools of water on the slick tarmac outside my window, which was not too dissimilar to the sound of disappointment that I ordinarily go to bed with.  Some nights the sound was so frequent and fierce that it was like falling asleep under a waterfall, and after a while, I was beginning to consider whether it might be a prudent idea to wear a wetsuit under the duvet.  I’ve heard the classic rock songs November Rain and Wake Me Up When September Ends, but this was more a case of November Rain coming early, and I didn’t want to be woken up until it had ended.

By the time the afternoon of the middle Friday of the month came, my heating had already been turned on for six days and nights, and I had become so tired of the climate that I needed to dispense with my usual spinach based salad lunch in favour of a spinach based hot pita bread.  I spread a thin layer of tomato pesto on two defrosted pita bread, covered them with spinach leaves, sliced cherry tomatoes and crudely shaped squares of feta cheese and baked them in the oven for around twelve minutes.  As they heated, I stood in the kitchen looking out of the window at the clothes airer which was standing as a sodden centrepiece in the garden.  Cobwebs hung between the barren lines, giving the impression of the cracks on a jewellery store window which had been burgled.

My attention turned to the kettle, which had finished boiling, and I poured myself a cup of Earl Grey tea.  I reached down into the fridge for the milk and was reminded of the punnet of baby button mushrooms I had recently purchased.  For my entire life, I have had a bitter loathing of mushrooms, and nobody has been able to convince me of their merits.  I had probably only ever tasted a mushroom once and that was enough for me to make my mind up.  I could tell just from looking at them, and from the way that they feel, that I didn’t like them, similar to the way that one tenuous joke is enough for most girls to decide that I’m not the man for them.  However, I had recently eaten a chicken dish which was served in a mushroom sauce, and I hadn’t found myself terribly repulsed.  In addition, the bags of frozen vegetables which I had been buying whilst without a hob in my kitchen also contained small slices of mushroom, which I quite happily ate when disguised behind an entire fork full of carrots and peas.  I convinced myself that this would be as good a time as any to try to refine my attitude towards fungus, and I bought a punnet of baby button mushrooms with the intention of roasting them along with some other vegetables.  When the time came, though, I couldn’t bring myself to peel open the punnet and use the sickly looking mushrooms as intended, and I returned them to the fridge, hiding them behind a case of large eggs.  Several days passed and the mushrooms remained in the refrigerator.  The use by date was approaching and I knew that I was involved in a standoff.  I didn’t want to eat the mushrooms; my fears and disgust had gotten the better of me and I couldn’t bring myself to eat them, but at the same time I had spent money on them and if there is anything I hate as much as mushrooms, it is wasting cold, hard cash.  I sighed, pretended that I had not spied the punnet behind the eggs, and finished making my cup of tea.

The two pita bread were cooked, and when I removed them from the oven they looked appetising.  I sat at the breakfast bar to enjoy my lunch, and when I bit into the bread a cherry tomato erupted in my mouth like a volcano.  I felt the roof of my mouth burn from the molten juices which were released by the smouldering fruit, and for a moment I considered how much less painful it was when I was eating salad for lunch on those warm sunny days in July. 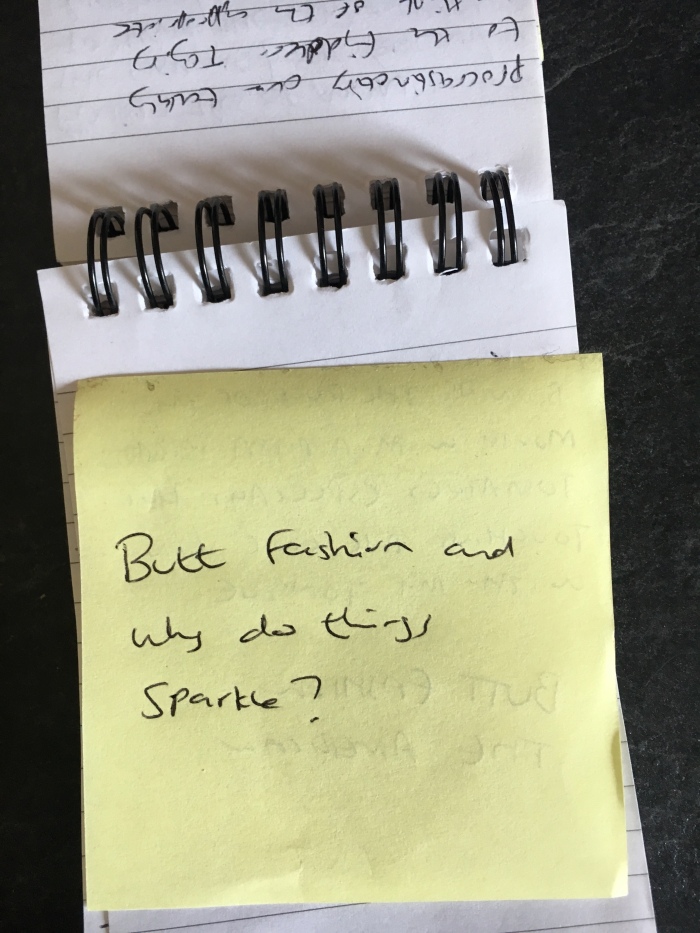 A slender thread of skin dangled from the affected roof of my mouth, like a stray strand of material from an old and worn winter jumper, and later in the evening when I became involved in a conversation with a female American tourist about butt fashion, and I could feel my tongue flicking at this flailing piece of flesh, I became worried that it would appear to any onlooker as though I was making some kind of salacious attempt at seduction.

The Floridian expressed her dismay at people who wear jeans with material which sparkles on the back pockets, and I broadly agreed with her.  My tongue was touching the loose skin from the burn every time I spoke, and I was increasingly aware of it, to the extent that I tried to use as few words as possible.

“Why does a butt need to sparkle anyway?”

“A good butt should speak for itself,” was not something I would necessarily want to write on a greeting card, but it seemed to convey everything I wanted to in this moment.

My brother and I were intending on continuing down the Esplanade to Markie Dans, but the Tom Petty and the Heartbreakers song title had Aulay’s down as her number one bucket list attraction for her short stay in Oban, and sensing a rare opportunity to make a woman’s dream come true by inviting her to Aulay’s, I agreed that we would accompany her.  We ordered our drinks at the bar, and as I continued to experience trouble with the piece of burned skin which was dangling from the top of my mouth, a large black labrador dog appeared and took the American girl’s attention.  At closing time, I made the short walk home in a cool light drizzle, and I wondered if things might have been different had I been a man who eats mushrooms.