There is a lot to be said for the bar, though it is often what is being said inside the bar that interests me the most.  The more time I spend talking to people over a pint of Tennents or a glass of whisky, the more I find myself wishing that I could pick the most exciting parts from these wonderful bar stories and weave them together into a patchwork quilt representation of my own life.  I suppose, essentially, I have been keen to turn my existence into a lie, because the real thing hasn’t been earning me much credibility in the exchange of pub tales.  The trouble with creating my false existence, however, has always been my lack of guile and what I perceive would be my inability to make thrilling stories of adventure seem believable as my own.

A recent example of a story I was told in a bar which could never be passed off as my own was when the plant doctor told me of the night he spent talking to two German girls he had encountered for the first time.  Holding a conversation with one girl for any period of time is troublesome enough for me when every sentence is fraught with the danger of making some stupid joke, but to keep two women interested for many hours seemed like an outrageous achievement to me.  The plant doctor proceeded to offer the opening line he used to draw the two German girls into a conversation, and I listened with interest.

“I bet I know a way that I can make you smile,” the plant doctor told the Deutsche damsels before performing his patented magic trick.  The girls did indeed smile, and they stayed in the company of the plant doctor for the rest of the night, and as he regaled me with this story I knew straight away that I wouldn’t be able to pass it off as my own.  I pictured the scene in my mind’s eye, and it was clear to me that in such a scenario I would never know for sure if the German girls had smiled because I would have left the room immediately after using the initial line.

As the week wore on, the September rain which had been falling steadily for days developed into a series of storms, and it seemed as though everyone was talking about a spectacular thunderstorm that was ferociously loud and which had lit up the midnight sky over Oban.  The more people spoke of this electromagnetic event, the more it was beginning to dawn on me that the thunderstorm had taken place on the one night that I had gone to bed and fallen asleep without the nightly tossing and turning I usually perform.  As far as I was concerned, the explosive storm could have been a supermarket delivery lorry, or a group of drunks spilling home from the pub, for all the awareness I had of it happening.

The day after the thunderstorm which most people other than me had heard, I suffered my first anxiety attack in months.  It was brought on unexpectedly and came as suddenly as a bolt of lightning, and it rattled in my bones.  The ankles of my trousers were drenched from the rain I had encountered in the morning, and inside I was feeling a downpour which I didn’t know how to stop.  I had a similar experience on Saturday night, sometime around midnight, and it was only then that I could know for sure that I wasn’t feeling anxious about the thunderstorm I had missed. 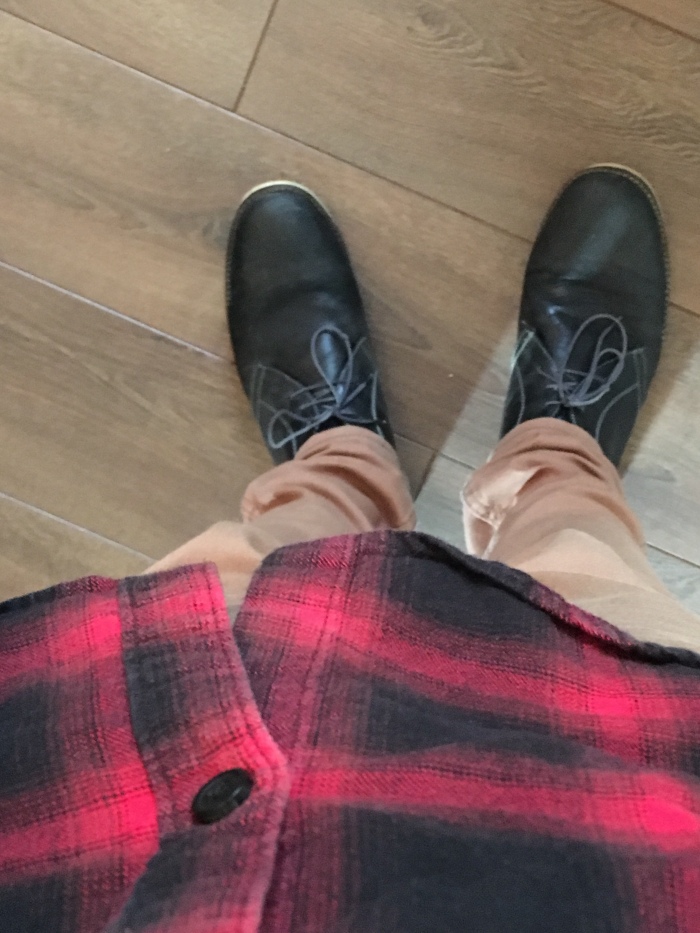 It was presumably as a result of the confusion I had been feeling for several days that on Saturday I decided to wear a pair of navy blue boots, which I hadn’t worn for some time.  I had bought the Red Tape Crumlin navy boots prior to my first trip to New York City in the March of 2015, and they are the most comfortable boots I have ever owned.  I walked for miles and miles on that trip, and my feet formed a close and intimate bond with the boots.  To walk in them feels like how I would imagine it is to stroll along a pillow of clouds, a feeling which in itself probably resembles the effect created by three or four Jameson.

Despite the soothing comfort brought by my favourite footwear, my decision to wear navy boots had forced me to defy my own dress etiquette by not matching the colour of my belt to my shoes or boots, and that was causing me some distress.  I felt like the Aerosmith song Livin’ On The Edge.  My wardrobe is a lot like the karate student who cannot advance beyond the rank of green belt:  I don’t own a blue belt.  I only possess a black and a brown leather belt and wearing black with navy blue shoes weighed on my mind throughout the day.  It didn’t matter to me that the boots were so old and worn that the navy blue colour had begun to fade and muddy into a sort of dishwasher pastel; I still felt that other people in the bar would notice and critique my judgment.  They would look firstly at my feet, and upon seeing my navy blue boots they would immediately be questioning whether or not I was wearing a matching blue belt.

“He doesn’t look like he does karate,” they would be thinking to themselves or speaking in hushed tones to their more appropriately dressed company, “there’s no way he owns a blue belt.  Nobody wears a blue belt, so why is he wearing blue boots?”  I consciously held the tails of my checked shirt over my waist so that nobody could catch sight of my belt.

“If this guy can’t even match the colour of his belt to his boots then what else can’t he do?”  They would continue discussing amongst themselves in their perfect little bubbles.  “He probably can’t even keep his houseplants alive.  Or find a use for mushrooms.  Or make a girl smile.  Or…”

Anthony Joshua was defending his world titles on Saturday night, and as usual for an AJ fight, the bar was busy.  I welcomed it as an opportunity to use a joke I had been working on in my internal monologue for a while, and when anyone would ask, “are you in for the fight?”  I would respond, “yes – and I’ll probably watch the boxing, too.”  Nobody found this line funny, except for the barman who used to wear glasses.  He laughed warmly, and I found myself thinking that his decision to switch to contact lenses had probably improved his judgment as well as his vision.

Long after the fight, and after the bell had been rung for last orders, myself and five other people retired to my flat, where we drank Jack Daniels and watched the Baby Shark Dance video until some time around five o’clock in the morning.  The drink and dance companions ranged from a good friend and skilled sandwich artist to someone I know, to a friend of those two friends, to a stranger met in a bus shelter.  The number of people made for a difficult seating situation, as my flat only has the furniture for five butts, although one of the group left fairly early and we were able to make it work.

One of the girls was heard to remark that my living room has “the wrong Feng shui,” and I could only assume that this was in response to the large coffee table which sits in the centre of the room and is much larger than most people.  Its size made it difficult for everyone to accurately follow the Monkey Banana Dance, and it clearly wasn’t something I had fully thought through when I moved in.

When I last looked at the clock on the mantelpiece it was approximately 6.20am.  Everyone had left in a taxi more than an hour earlier, and I had spent the time finishing off a generous measure of Jack Daniels and repeatedly listening to November Rain by Guns N’ Roses and The Wrong Year by The Decemberists.  November Rain has long been my favourite song, and I had learned that the sandwich artist is fond of it, and that was something that stuck in my mind.  I sat on the window seat and surveyed the scene around the living room.  Puddles of bourbon whiskey and Coca-Cola swam atop the surface of the Portland oak laminate flooring alongside broken fragments of Pringles.  On the coffee table sat an empty tealight candle, the wax having long been melted away, and in the discarded silver shell was a crushed cigarette butt.  The Jackson Pollock print above the sofa was hanging squint, angled to the right, and it was a visual representation of how I was feeling.

I picked myself up from the window seat and turned out all of the lights, though the streetlights formed an eerie reflection in the pools of whiskey on the floor and I couldn’t forget about the mess.  I staggered through to the bedroom in my comfortable navy blue boots, and it was like walking on top of a sea of clouds which were on top of another layer of clouds.  I tumbled onto my bed and thought about how if this was another person’s story it would surely have had a more exciting ending.