The infant days of April arrived with a sense of spring that was carried over the town by the warmth of a big, bold sun which bathed in the still sea.  When walking through George Street there were dank leftover oozes of winter when the sun would disappear behind the buildings, which for a few days made it difficult to decide how heavy a coat should be worn.  Until midweek I was persevering with my long black coat, wary of the chill that was still liable to creep up on a person.  This reminded me of the way that my niece always likes to hide behind the curtain in my living room when we are playing hide and seek, and I have to pretend that I don’t know that she’s there.

There is a legitimate vibrancy about the place when the sun is out.  Everything is brighter and everybody seems happier.  Though as much as I really want to enjoy the more pleasant climate of the season, I have found that spring only makes me feel miserable.  More specifically, hayfever is misery.  With the choked sinuses, the red eyes and the constant feeling of tiredness, hayfever can make spring seem like the beautiful friend you have but who you can never get as close to as you would like, because it only ever stings.

It cannot be emphasised enough how much of a pain hayfever is.  It is an ever-present nuisance throughout the finest months of the year; an irritant which for most of the time won’t leave you alone, and which you can do nothing about.  It is an allergy to joy.  Yet it isn’t overwhelming enough for a person to complain about, at least my hayfever isn’t.  It isn’t like the flu or a complete breakdown of the immune system.  It is a fly which you can’t swat.

Oban was a sight in all of its spring splendour.  The sun was casting shards of light onto the sea like it was a George Noble disco.  Families were strolling along the Esplanade with ice cream cones.  Heavy winter jackets had been replaced by loose clothing, such as t-shirts.  The al fresco areas of coffee shops and bars were bustling.  On the pavements there was a hive of activity as dozens and dozens of disoriented pedestrians were ambling in no particular direction.  They were all of a certain vintage and each of them had the appearance of someone who had been walking for several hours for no discernable reason.  There was a dazed look on their faces, and it figured that they had likely come off the cruise ship which was docked in the bay and was the size of a small island.

Having made land for the first time in hours, or possibly even days, everything the tourists saw was new and wonderous.  Everywhere they looked there was a fresh photo opportunity:  the green hills cradling the town, the sky as blue as a carpet, a fishing boat crawling across the water, a seagull eating a chip, an empty Tesco carrier bag agitated by the breeze. 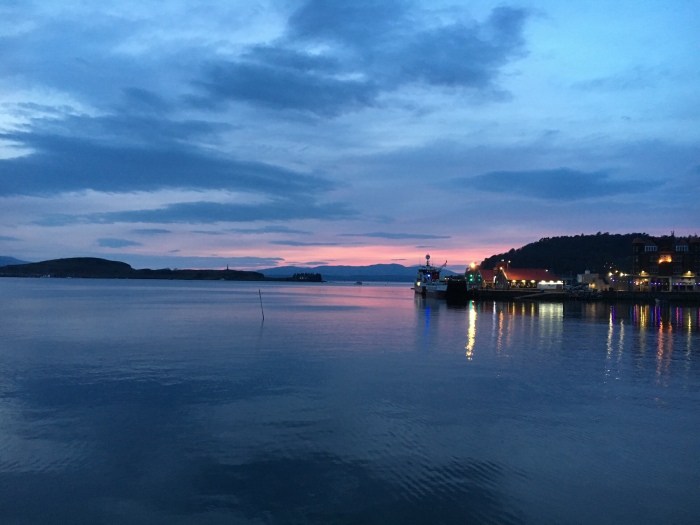 The sunny days were stretching long into the night, making it possible to enjoy a beer in daylight late into the evening.  I met with the bird watcher and a departing rugby playing accountant in the beer garden of the Perle Hotel, where the price of a Fyne Ales Workbench IPA was broadly similar to its ABV percentage.  It was after eight o’clock and as we were drinking our pints the setting sun was being returned to the lonesome ocean. The location was serene, despite the beer garden only being separated from the town’s transportation hub by a wall which was not much taller than an Ottoman.  Relaxed holidaymakers were rolling their luggage into the hotel behind us.  Nearby, tourists were strolling under a sky which was purple, amber and all of the shades at the warmer end of a colour chart.  Groups of schoolchildren were walking by, revelling in the freedom of another evening of their half-term break.  “Your dick is tiny,” one of the girls shouted down the street at a guy she knew, presumably.

The girl in question congregated on the other side of the small wall with another girl and one of the boys who was in the company of the lad with the allegedly inadequate appendage.  They were maybe around thirteen or fourteen-years-old, though with my eyes it was difficult to be sure.  Their conversation was not discreet, and it soon became clear that a picture of a penis had been sent from the boy to the girl on the mobile phone app SnapChat.  I was thinking about how the most salacious thing I had communicated through social media was a request for the best place in town to buy shoelaces, after the pair on my black shoes had snapped in my hand, leaving one end shorter than the other.

It was an unusual place to be considering it, but I was finding myself in a moral tug of war as to which of the parties I had most sympathy for:  the girl who may have been the victim of an unsolicited dick pic, or the boy with the pensive penis which might have been goaded into action.  Although the decision to send such an intimate image through SnapChat was at best questionable, I was equally concerned with the issue of who had made the girl an authority on dicks.  There were all sorts of reasons that the image may have been underwhelming; an unflattering filter for one, or a sense of artistic creativity which had not yet been fully developed.

The question of the teenager’s method of seduction was bothering me.  I couldn’t help but wonder if the photograph had been the culmination of a lengthy flirtation process, or if the boy had made a bold, balls-out decision to send a picture of his penis to a girl in the hope that it might impress someone.  It seemed to me that the latter scenario would be a mistake.  Even if SnapChat images disappear after a short period of time, the taunting over the size of the image was likely to last much longer.  It would potentially define his high school years, whereas when I make a stupid joke to a girl in the pub the feeling of futility only lasts until the next stupid joke.

The extended hours of sunshine were bringing light into parts of my flat which had only ever existed in perpetual darkness, as though shining a spotlight on my cleaning.  Suddenly I was made aware of a layer of dust on the foot of the mirror in the corner of my bedroom, and of a cobweb on the fireplace.  It was an opportunity for a literal spring clean, and as I went about the task I sneezed repeatedly and loudly.  On my knees, I thought about the stories the passengers from the cruise liner would have to tell their friends when they eventually returned home from their travels.  They would wax lyrical about the sunny shores and the scenery on the west coast of Scotland.  They would recall the busy town they had visited and the insults they thought they had heard the teenagers trade, though couldn’t be sure because English isn’t their native language.  Then there was the man in the long black coat whose eyes were red as though from crying at the arrival of spring.  Of all the unusual things, hating spring has to be up there.