Much like Bigfoot, The Yeti and President Donald Trump’s sanity there have long been questions raised over the existence of so-called ‘man flu’.  There were reports as recently as last year suggesting that the male species really does suffer worse from the cold virus due to having weaker immune systems than our female counter-parts; whilst other researchers will scoff loudly at such a notion.  Having never spent a day in the female form and therefore having no knowledge of how women work – as my romantic history will testify – I am not going to debate the prowess of man flu; rather I am here to state that having a cold can make going to the football in February a bit of a miserable experience.

I can provide no evidence linking the quality of football on show at Celtic Park last night to my cold, but then I feel that in 2017, the year of the alternative fact, I shouldn’t need to. Nor should it be suggested that the seven beers prior to kick-off were a contributing factor, or that the inordinate amount of cheese consumed from a platter at the Hippo Taproom created such a fuzzy high in my head that nothing could possibly be as it seemed. This was all the doing of my cold. 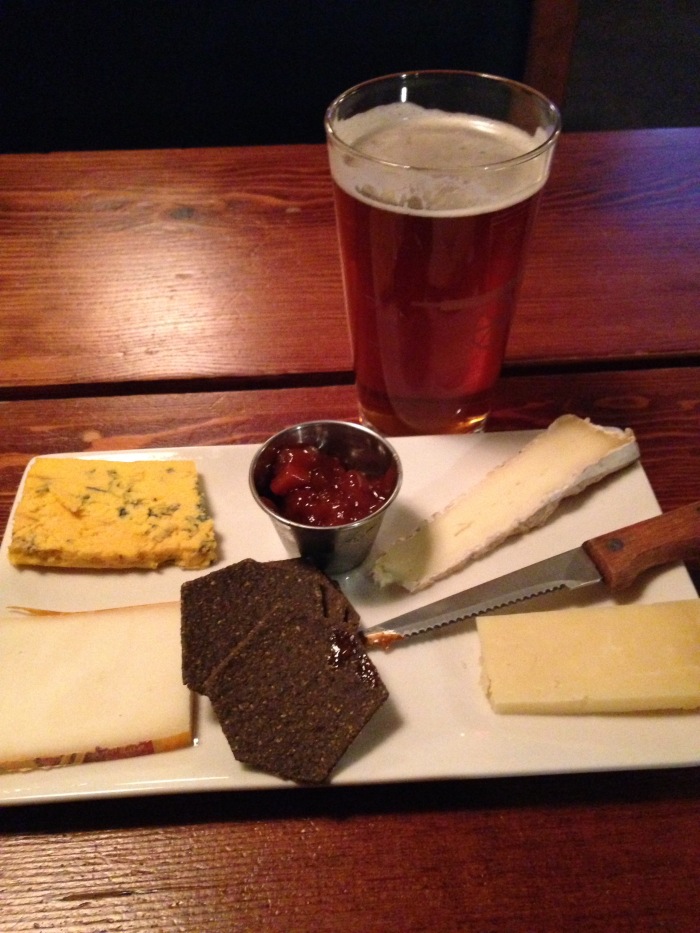 It’s not that Celtic played particularly badly.  On the contrary, they were professional, controlled and in parts dominant.  But Aberdeen were stuffy, congested and blocked off any space to the extent that this became quite a chore to shiver through.

The first-half felt as though it passed with me sneezing more frequently than there were shots at goal, which is not all that remarkable a statement considering that there was only one attempt on target – from Aberdeen – and that I was sneezing a lot.  My nose was running more threateningly than James Forrest, whilst Jozo Simunovic seemed to cough up possession to a red shirt almost every time he tried to play from the back.

It isn’t often at Celtic Park this season that you’ll see this team so drowsy for 90 minutes, and nor was it the case here when ten minutes into the second-half the away defence fell apart like a wet paper tissue as a Scott Sinclair free-kick found Dedryk Boyata’s majestic head and the ball whistled into the back of the net.  Suddenly the Celtic virus threatened to riddle Aberdeen’s system as they streamed forward at every opportunity, attacking their sinuses and their goal with swift passing exchanges.  The Dons resisted, though, and one goal was enough.

The stadium lit up with thousands of smartphone torches and the sound of jubilation rang out as news filtered through from Edinburgh that Rangers were suffering a humiliation at the hands of Hearts and their Football Manager, yet I couldn’t muster the energy for much more than a blow of my nose – again – and I slumped back in my cold plastic seat as drops of rain began to fall from the dark Glasgow sky like an overproduction of mucus spills from a nostril.  Great.

I can’t say whether ‘man flu’ exists and the cold affects men more prominently than it does women, but I can say for sure that it doesn’t make attending the football any more fun. 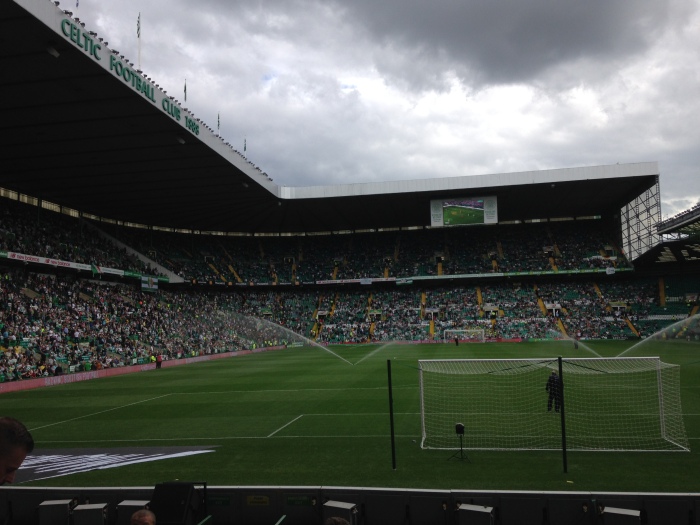 Perhaps the largest roadblock to having a good Saturday morning is enjoying a good Friday night which extends much later, and several drinks longer, than intended.  Getting out of bed at 7.45am for a three-hour train journey is a chore when you only went to bed around six hours earlier; your mouth feels and tastes like a desert where several creatures have died and to make matters worse you forget to pick up your banana before you leave home.  You try and eat a roll on the way to the station but your internal organs have all curled up into the foetal position and snort in derision at your ridiculous attempt to appease them for the damage done.  Reading the newspaper is an act in trying to fend off your body’s patent desire to both vomit and fall asleep simultaneously.  Eventually you give in and sleep.

You arrive in Glasgow and foolishly believe that a sandwich and some soup might help matters, give the body the substance that it has been craving all along.  But it turns out that your body was pulling an elaborate practical joke all along and what it really, truly wanted was a beer.  It has known you for thirty-two years, after all.  It knows what you need.  So you go to The Raven for a couple of pints of Caesar Augustus and everything feels better, the equilibrium of the world has been restored.  You are no longer drunk/hungover from the night before.  Your mouth doesn’t taste like several animals have died in the desert, rather it has the fragrant tang of a lager/IPA hybrid.  Tiredness has given way to the excitement of your first match as a season ticket holder at Celtic Park. 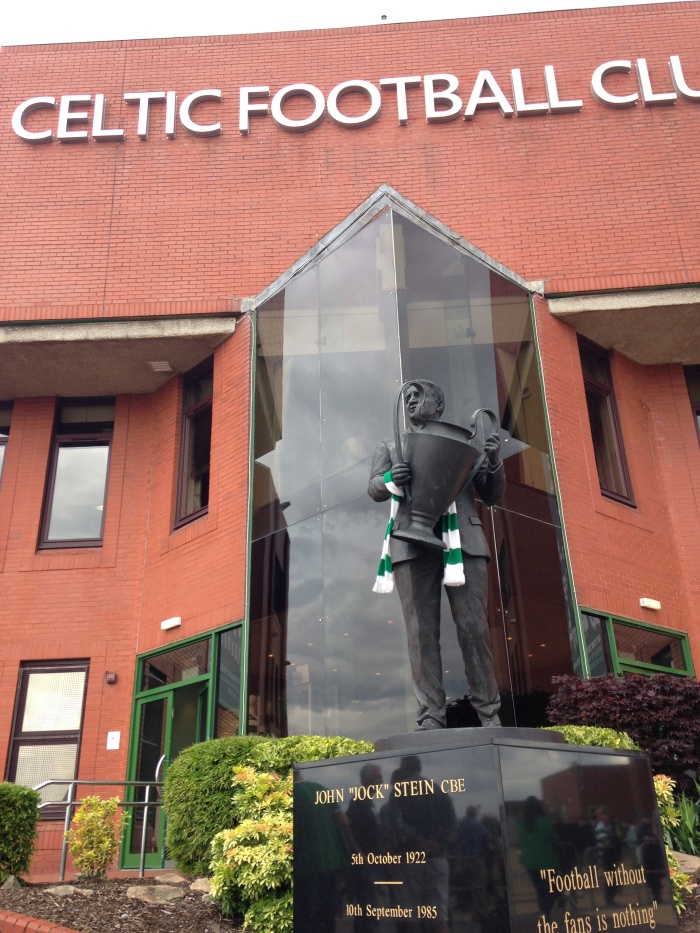 There was only one question prominent on my mind when I took the short walk from Dalmarnock train station up the Celtic Way:  should I sate my hunger for a pie now or at half-time?  (I checked the team news before I left The Raven and Brendan Rodgers had answered the other question on my mind by dropping Craig Gordon.)  It was around 2.50pm by the time I made it through the fairly lengthy turnstyle queues and into the stadium, probably cutting it a little fine to buy a pie and eat it before kick-off I thought, so I decided to save that treat for the interval.  But I’d be lying if I said that I wasn’t thinking about that pie for large periods of the first-half, especially during those lengthy spells where it felt that Celtic were simply passing the ball around their own 18-yard box with little intention of going forward, almost as though goading the ten Aberdeen men camped inside their own-half to come out.  Thank goodness I was no longer hungover, because those passages of play would surely have sent me to sleep earlier in the day.

Three first-half goals – two of them for Celtic (two very fine finishes from Leigh Griffiths and James Forrest) – meant that I could look forward to my pie without having to worry too much about the football.  The lines at the various food outlets were long and disorganised, presumably because many folk worried even less about the game than I and had retreated to the pie stalls before the whistle.  Standing at the back of this line, with the front about as far away as it had ever been, my craving for that meat and pastry intensified.  There is no finer hangover food than a good stodgy pie.  Maybe a sausage roll (links, not pastry) with the right kind of mustard, but it’s debateable.  I wanted that pie terribly; I dare say that I needed it.  I had forgotten my banana, my body rejected the bacon roll and the soup and sandwich were laughed off as a cruel joke.  It was a pie at the football that I was craving all along,

When I finally made my way through the long and disorganised pie line and exchanged my £2.50 for a steak pie and returned to a safe location from which to enjoy said pie it crumbled immediately as I tried to free it from its foil container.  The “lid”, the top, lifted right off, leaving the base and all of the meat sitting in the foil.  If I wasn’t crying literal tears then I was certainly on the brink.  I attempted to make the best of a relentlessly terrible situation, but the internal elements of the pie were piping hot and not conducive to scooping up with fingertips.  It was quite the ordeal.  I eventually managed to manipulate the foil enough to allow me to consume the vast majority of the pie, but it wasn’t the same.  It wasn’t nearly enough.  All that anticipation, all that hunger, all that need and it came apart like cheap discount retailer tissue paper.

Sometimes you have to overcome hurdles in life, though.  You have to learn to deal with disappointing situations such as pies falling apart in your hand.  There were still forty-five minutes of football to get through here and although Aberdeen had spent almost as much time in possession of the ball as I had enjoying a half-time pie they were still very much in the game.  There were times where Celtic were careless with the ball and the crowd would become tense.  They were looking for that killer punch but all they were getting was pastry stuck to foil.  Some of the guys around me in 140 were keen for the ball to be “booted up the park”, but any time that happened it invariably landed with a red shirt.  Others felt that howling their support for the IRA might spur their heroes onto victory.  There was the oft shouted critique that any Aberdeen player was “a sheep shagging wanker” which, to me anyway, seems like a contradiction in terms.  If he’s shagging sheep then why the need to masturbate?

As it was Celtic added a further two late goals – through a Scott Sinclair penalty and the man of the match, Tom Rogic – and everybody inside Celtic Park went home happy. Everybody except me.  I was still pretty disappointed about that pie.